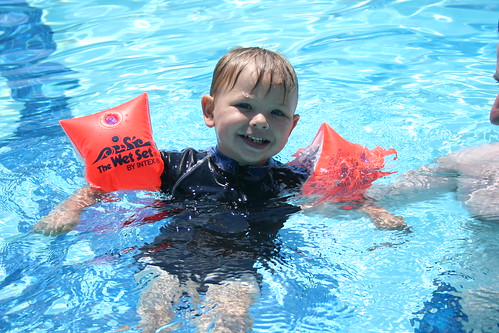 Two years old, can you believe it? For his birthday we had a little gathering at my mom's community pool with lunch and cupcakes and swimming. That afternoon, unfortunately, he got quite sick - we think it was a tummy bug that has been making the rounds of our household.

On Monday he had his 2 year doctor's appointment; he is 32 lbs and 38 inches tall - I don't grown 'em small, you know. Also on Monday he started at his new daycare which he will be at for 2 days/week until mid-August, when he will switch to full time. He seems to really love it there. He's such a social creature, he thrives with other kids around. I am very grateful for that. On Monday & Tuesday when I picked him up, they were in the middle of singing time and it took him a good few minutes to even notice that I was there. 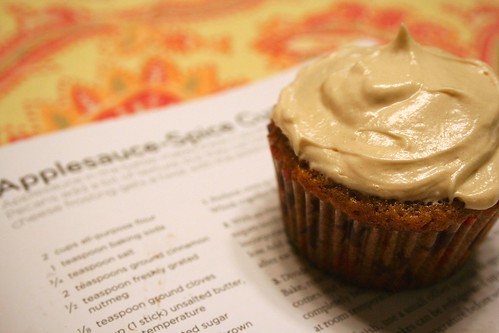 These are from Martha's new cupcake cookbook. As an aside, I find it amusing that I've made two receipes from this book, it's been out for less than a month, and it looks as if I've had it and been using it for YEARS.

These cupcakes are quite moist and very delicious. It is difficult to tell that they are *apple*. They could easily be banana or zucchini or pumpkin, even. The frosting is wonderfully tangy with a slight touch of sweetness.

As with the last Martha recipe I made from this book (Streusel Cupcakes), this recipe was much less complicated than a Martha Stewart recipe should ever be. The measurements worked out nearly perfectly - I used a cookie scoop to divide the batter evenly - 3 scoops of batter for each cake. They do not rise much. Each cupcake also received 1 (cookie) scoop of frosting. There was a little frosting left over, but I maintain that 1 scoop was enough. Be sure to whip the frosting long enough for it to become smooth and lighter in color. Also note, this is not the same recipe for Applesauce-Spice cupcakes as can be found on the MS website. This recipe is only available in the cupcake book: Martha Stewart's Cupcakes: 175 Inspired Ideas for Everyone's Favorite Treat 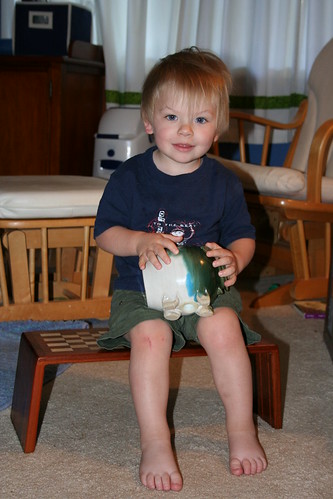 I've been catching some flack for not posting pics and all that jazz recently. So here's one I took at the end of May.

Here's a little story:
Last night, I was giving him a bath and...I farted. He looked at me and said, "Mommy! Noise!". I said "Yes, Mommy made a funny noise." He said, "Caleb! Noise!" and then proceeded to strain, forcing himself to fart. He looked very proud of himself and said, "Caleb! Noise!" until I commented that yes, Caleb had made a funny noise as well. I called Bill in, and Caleb glady demonstrated his gas-passing prowess. What a nice young man I am raising.

Me & Helene
Originally uploaded by heshta
Thou hast become somewhat of a Red-Headed Stepchild; ignored until needed and beaten upon when stressed. *sigh*

I admit that it was somewhat of a bad idea to declare May as a month of postings when May was possibly the busiest month I've had in ages. Reunion, then Artomatic preparations, then my birthday...these things pile up, you know. So for a quick version of the past month, I present you with Linkspam:


(Trika's mural is directly across from my stuff!)

How on Earth did I totally miss posting yesterday? I have NO IDEA. I have been practically falling over from exhaustion this week, it could have something to do with it. It's 9:20 on a Friday night and I am considering just going to bed. That's just sad

Busy day at work; Caleb's last day in his current daycare situation; did some shopping today at NY&Co with my coupons and their sales, got good deals. Otherwise, I have nothing to report.

I kind of had to trick myself into it. I didn't actually know I was running a 5K. I thought I was running 2.8 miles...and then they added a little extra and it turned out to be a 5K.

Never in a million years did I think that I would EVER run a 5K. Of course, it was a goal of mine, but a goal I never thought I would make.

Last night I passed out on the couch at about 9:15. Also my house is about 5 degrees colder than I like it to be because the condo folks have turned off the heat in preparation for turning on the air (which was needed two weekend ago, but not now!). So bundled up in blankets on the couch is where I was, and stayed, until I went to bed around 10:15 or so. Hence, no posty post. You'll get two today to make up for it.

For now, You get a list of super quick, Twitter-like, updates.

I submitted 3 pieces to the NIH Juried Art Show this year. Last year when it came around, it was advertised as only for NIH "SCIENTISTS" and while I could technically argue that I am a computer scientist, having a degree in that field, I didn't overly care. This year, it came around and was announced as ANYONE with NIH in some form or fashion and since I am an NIH contractor, I fit the bill.

They chose the piece that's been around the block and back, the purple swirly one in the icon here. I was serious about retiring it after this show, if I can. I might even retire the icon. I'm that sick of it. And no other quilts seem to stand a chance against it.

Anyway, I have to admit, at first I was a little disappointed. The "reception" was some plates of cookies and bottles of water. My quilt was in a "gallery case" through another set of doors, along with 8 other pieces - the rest of the pieces were located in a separate but attached length of hallway that seemed to gather much more in the way of crowds. AND they spelled my name wrong, making it impossible for anyone to contact me if they wanted to.

But then things improved. A few of my co-workers showed up, then Bill, then some of the people I am friendly with and then some Important People Whom I Am Friendly With. And then I finally went and spoke to the guy who had done much of the work on the show, to ask him to take my picture with the quilt. He told me how much he loved my piece and that they really wanted to display 2 of them, but that they were trying to go with only one piece/person (they had 500+ piece to chose from and only 40+ places). And then he asked me if Lillian had contacted me because she really wanted me to do a PRIVATE SHOW. Like...a show, all to myself, at NIH. Um. *blinkblinkblink*

We are not holding our breath.

But it was really nice to hear. 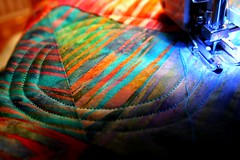 All washed up
Originally uploaded by alyson_olander
I promise these posts will improve. I'm so out of practice. I worked on this piece today. I know you can't see much of it here, but it will be in Artomatic between May 29th-July 5th, so iffin you want to see it, you should come for a visit. Or, I will probably post a full pic when it's done, so you could take that route as well.

Also, we made a pilgrimage to Ikea for Artomatic lighting and a myriad of other fun things. I want everything. In particular, a new kitchen; but also, everything.

The NIH Juried Art Show Starts tomorrow. My purple swirly quilt that's already been everywhere is in that show. While I am very excited to be accepted to a juried art show, I have to admit to feeling disappointed that the other submissions were overlooked in favor of the purple swirly one. I think it's getting retired after this show, I'm tired of looking at it.

Off to go work on some more stuff for Artomatic. I think it is possibly a bad idea for me to leave all of the hand-sewing till last...

Ok, clearly, I need to work on scheduling time for this. The day has disappeared! Tonight we are having dinner at a friends and by the time I get home, it will be late and I will be tired.

Things I wish to discuss about today:


...and that last one is the reason why I can't go more in depth at the moment. Ravioli! ACK!
Collapse